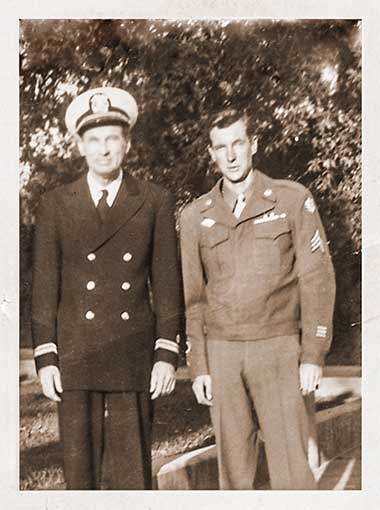 Frank McCoy opened a roofing contracting business in Houston, Texas in 1923 and in 1927 he moved his family and the business to Galveston, establishing the McCoy Roofing Company. Emmett McCoy said, “Hurricane business in Galveston ensured a roofer would stay busy. In fact, a hurricane in 1932 brought in enough business to put up the shop building McCoy’s Roofing occupied until 1953.” The company began selling roofing supplies on a limited basis in 1941.

In the early-40’s, both Frank and his son Emmett were called to serve their country, as a Merchant Marine and in the U.S. Engineer Aviation Battalion in the South Pacific respectively, while Frank’s wife, Margaret, and a foreman kept the business up and running. By the mid-40’s, both were back at work in Galveston and by 1948 sales of building materials began to expand.

Frank retired in 1950, and Emmett became President of both the roofing and supply businesses. McCoy’s Supply Company entered the emerging building supply industry in 1953 when its retail operations were relocated on Galveston Island, and McCoy’s product mix expanded to include plywood, doors, drywall and other materials.

Frank McCoy moved to California in 1952, making Emmett acting Chief Executive Officer. As CEO, Emmett made the financially-driven decision to discontinue the roofing company and concentrate on the sale of building materials moving forward. 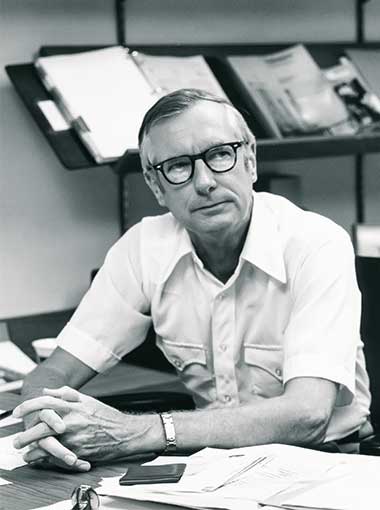 Emmett was born in Houston, Texas on February 27, 1923. He was the son of Frank and Margaret (Drees) McCoy, and grew up in Galveston, Texas. Emmett’s family moved to Galveston, Texas when he was four years old, the same year Frank McCoy founded McCoy Roofing Company in 1927. Emmett was active in Boy Scouts growing up and was an Eagle Scout. He was also a member of ROTC at Ball High School, graduating in 1939. He then attended and graduated from New York Trade School, and it was during his time in New York that he met the love of his life, Miriam Swanson. Working in the shipyards in Orange, Texas at the beginning of WWII, he enlisted in the U.S. Army in April of 1943. He served in an Engineer Aviation Battalion in the Pacific Theater, and he was discharged with the rank of Sergeant in January of 1946. He and Miriam married the very next month on February 23, 1946 in upstate New York, and came back to Texas to start their life together.

Emmett founded McCoy Supply Co. in the fifties, which later became the present day McCoy’s Building Supply. His is a classic “Greatest Generation” story in which he and Miriam raised a family (their four children, Brenda, Mike, Brian and Dennis) and built a business with incredible love, passion and drive. Starting in a building no larger than a 4-car garage, McCoy’s, at the time of Emmett’s retirement in 1997, had grown to over 85 locations with sales exceeding $400 million. He was a pioneer in the cash and carry building materials market, and today McCoy’s is one of the largest family-owned businesses in the industry.

Emmett and Miriam moved to San Marcos in 1972 and adopted the city as their hometown. Other business enterprises Emmett was involved in during his career included Balcones Bank, which grew from one location to four during the family’s ownership, and McCoy Land & Cattle Co., which he expanded into a large cow-calf operation in far West Texas. He retired as President and CEO from McCoy’s in 1997, leaving the company in the capable hands of his sons, Mike and Brian McCoy.

Emmett was always very generous to the community, and once retired, Emmett and Miriam focused on philanthropy in a bigger way than ever before. Their gift to the Emmett & Miriam McCoy College of Business is the single largest gift received by Texas State University to date. Their gifts, both large and small, were often anonymous, but were felt by so many in San Marcos, Hays County and across Texas and beyond. 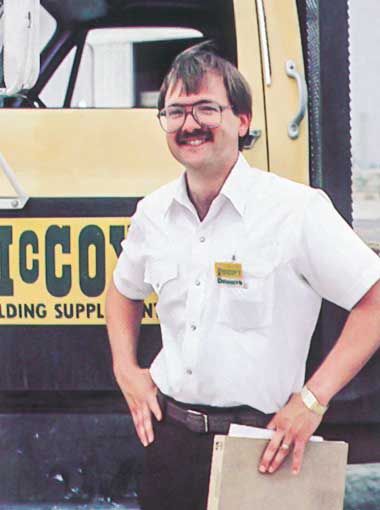 Dennis was the youngest of Emmett and Miriam’s four children, and he did it all at McCoy’s. Like his brothers, he was a graduate of Texas Tech University in Lubbock, and starting as a young man and throughout his college years, he worked in the family business. He worked as a yard hand, a driver, in floor sales, and as an Assistant Manager and a Store Manager along the way. Later, he shared the position of Vice President of Operations with his brother Mike, traveling to McCoy locations every week.

On April 30, 1985, Dennis died in a plane crash at age 28, as he made his way to visit the McCoy’s Brownwood, Texas location. He is survived by his wife, Cindy, and two daughters, now grown and with children of their own. All remain a vital part of the close-knit extended McCoy family.

In a statement released the day after Dennis’ death, Emmett, Mike and Brian assured employees that while no single individual could ever compensate fully for Dennis contribution to the company’s success, they planned to operate the business and continue to grow, believing the future of McCoy’s was still bright. They ended with saying “Dennis was great in all the roles he had – he was a great husband, father, son, brother, but most of all he was a great man.”

The Dennis P. McCoy Employee Crisis Fund, supported primarily by the employees of McCoy’s charitable donations, was named in his honor, celebrating his life and reaching out to support the families of McCoy’s employees during times of struggle. 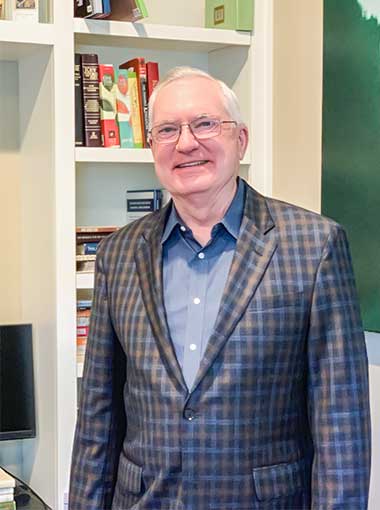 Growing up in the 60’s, Mike worked in the family business alongside his brothers on Saturdays and summers. Through the years, he gained experience in a variety of positions, including yard hand, truck driver, floor sales, Assistant Store Manager, Store Manager, Vice President of Operations, and Co-President of McCoy’s Building Supply.

The eldest of the McCoy boys, Mike graduated from Texas Tech in Lubbock with a Bachelor’s Degree in Management and joined McCoy Building Supply full time in the 70’s, when the company had just 11 locations. After his brother Dennis died in a plane crash in 1985, Mike found comfort in his Christian faith and a belief that McCoy’s should focus on helping each person in the organization grow. He and Brian adopted a new philosophy to “grow self, grow others, and grow the business” in that order.

From the 80’s through the mid 90’s, McCoy’s store location count continued to increase and so did the competition. Among other advancements, McCoy’s expanded product selection, and added a credit department, an outside sales team, and two door plants. It modernized its accounting, IS and marketing functions and continued to evolve its store model, and as credited by current CEO Brian McCoy, much of this change was driven by Mike.

Mike and Brian took the reins from their 74 year-old father when Emmett retired in 1997 but by 2001, Mike decided to step down and sold his interest in the company to his brother and Co-President, Brian.

Mike is married to Myra and they have three grown children. Today, they divide their time between Texas and the Seattle area and enjoy spending time with their big, extended family. 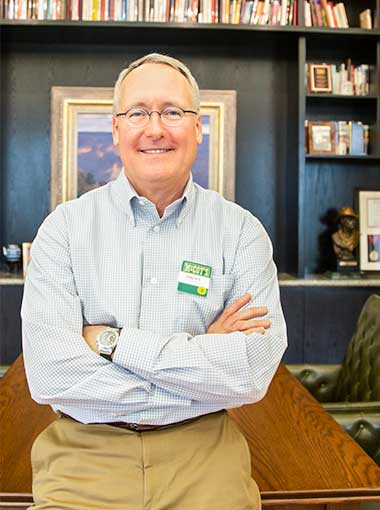 Brian McCoy was born in Galveston, Texas and graduated from Ball High School in 1972. He graduated from Texas Tech University in 1975 with a BBA in Finance. Brian married his high school sweetheart, Wetonnah Lane, in 1976, and they have two grown children, both married, and four grandchildren.

Brian has been actively involved with McCoy’s from the age of 17. Yard hand, truck driver, floor sales, Assistant Store Manager, Store Manager, Merchandise Manager, Vice President, Co-President, President and CEO are all positions he held during his 50-year tenure at McCoy’s. He presently serves as Chairman of McCoy’s Board of Directors.

Brian is also a partner in McCoy Remme Ranches, a cow-calf operation with land holdings in far West Texas. He serves as President of the Board of Directors of the Emmett & Miriam McCoy College of Business Administration Development Foundation at Texas State University. He also serves as Past President of the Board of the Lumbermen’s Association of Texas and is an active Board Member of Intimate Life Ministries. 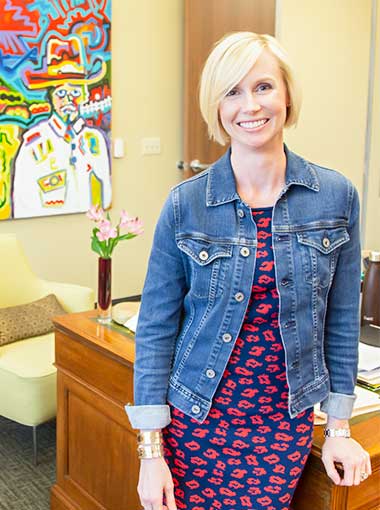 Meagan is the fourth generation to work for McCoy’s. Her first job was the Headquarters receptionist…she was 10 years old. Like her father, Meagan grew up at McCoy’s. Over the years, she worked as a receptionist, an advertising intern, and shadowed in many departments at Headquarters while still a high school student. While in graduate school, Meagan began working part-time at McCoy’s Building Supply in Georgetown, Texas as a salesperson and realized what was always interesting to her as a kid was indeed her true passion; the business and the people of McCoy’s.

Upon graduation, she joined McCoy's full-time in the Corporate Development department with the specific goal of learning all facets of McCoy's Headquarters operations. During that time, she also worked with the Texas Legislature on behalf of McCoy's to revise the Business Franchise Tax. In 2007, Meagan began a one-year term as Assistant Store Manager at McCoy’s Manchaca location and went on to become Director of Corporate Development, Vice President of Field Support, and Senior (then Executive) Vice President and Chief Operating Officer prior to becoming as President and COO. In 2022, she was named President and CEO.

Meagan is a member of the Board of Directors of McCoy Corporation, a partner in McCoy Remme Ranches, co-Chair of the Legislative Committee of the Lumbermen’s Association of Texas, a Board Member of the Texas Association of Builders, and an involved member of the Greater San Marcos Partnership working on issues related to development, conservation, and affordable housing. She is a former Board member and passionate supporter of Mobile Loaves & Fishes, a social outreach ministry that empowers communities into a lifestyle of service with the homeless. She is married to Richard Jones, and they have two young children.